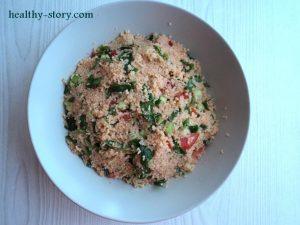 Preparation:
Put the bulgur in a big bowl and pour the boiling water on top of it. The water should cover the bulgur totaly and it should even be above it with about 2 cm. Cover the bowl with a lid, then wrap it in a towel. Leave the bulgur like that for about 15 minutes, so that it can totally soak up the water and soften.

Now cut the tomatoes, the cucumber and the spinach as fine as possible. Add them to the bulgur when it is ready, then add the fresh squeezed lemon juice, olive oil, himalayan salt, cummin and ground chili pepper and mix it very well. Traditionally in Turkey people press the bulgur by hands, so that the spices get distributed equally everywhere, but if you mix it well enough with a spoon, the effect is the same.

You can put the salad in the fridge so that it cools or you can eat it directly. Keep in mind that the salad sates you really good. People who prefer not to use gluten, can use the bulgur made of einkorn wheat.

Note – this is not the traditional Turkish recipe, I have changed some of the ingredients. For example, in stead of raw spinach, traditionally they use green onion and lettuce, and together with the raw tomatoes, they add extra tomato paste.